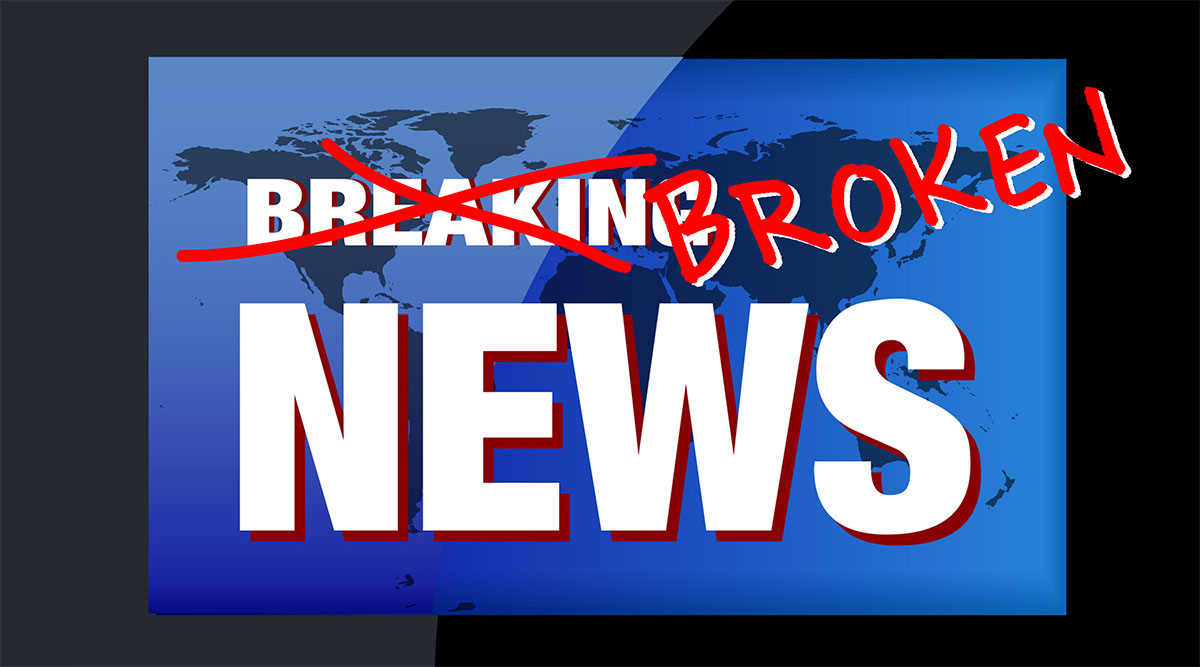 I trace my roots as a news junkie back to the 1960’s when John Facenda did the local news followed by Walter Cronkite with the CBS Evening News on Channel 10 in Philadelphia. I had childlike trust in these guys (I was a child) and there was no question they were telling the truth to the best of their ability. Telling unvarnished truth was an aspiration I learned in English classes at Central High, one of two high school lessons that stayed with me in later life. The other was typing.

Even in the 70’s when electronic newsgathering (ENG) started taking the place of film and live news became a reality, we came to expect honesty in reporting with ENG merely a new tool in the journalists’ arsenal. BREAKING NEWS was the term used when big news happened with breathless urgency and the anchors and reporters raced to get it on the air. Oxford defines it as “newly received information about an event that is currently occurring or developing.”

Now, thanks to 24-hour cable news networks in need of constant stimulation for their bored audiences, BREAKING NEWS has lost its meaning. Every day almost without exception, Wolf Blitzer opens his CNN Situation Room broadcast at 5pm ET with the animated, in-your-face BREAKING NEWS graphic and edgy music, followed by news that “broke” many hours before. It’s laughable, really, for someone who follows news during the day via computer or other devices, and even for normal people who catch up on the day’s news when they get home from work. The BREAKING NEWS noise is hyperbole, dishonest and the ultimate marketing ploy to get people to lean forward and listen to a product that they will learn quickly is not as breaking as they were led to believe. I only pick on CNN because that’s what my wife and I watch regularly and just as regularly, we look at each other and roll our eyes at BREAKING NEWS we both know is hours, sometimes many hours, old.

Why should we care? It’s about honesty in writing and reporting. Remember truth? Remember trusting that the news anchor’s not bullshitting us? While we’re at it, the use of middle-school theme adjectives like “shocking”, “stunning,” “tragic” and the like is lazy writing and, by the way, an opinion no one asked for. Viewers are capable of discerning what’s tragic and shocking. They don’t need to be told what to feel. It’s SOP that cable news hosts (they’re not all journalists, but many are) are given license to opine about politics, roll their eyes, even make speeches about the stories of the day. It’s not a far reach anymore to travel across the line that separates truth in reporting from editorializing in the name of truth. We saw a lot of that in the past four years thanks to the previous President of the United States whose behavior demanded a daily accounting of truth from the news media. That IS one of the roles of journalists, damn straight. But keep your body language and your snide remarks–your opinions–off the air! Write a book or be funny on the Colbert show. But when you’re on TV under a NEWS banner, keep your nose clean and walk the line.

And, for godsake, stop breaking the news.