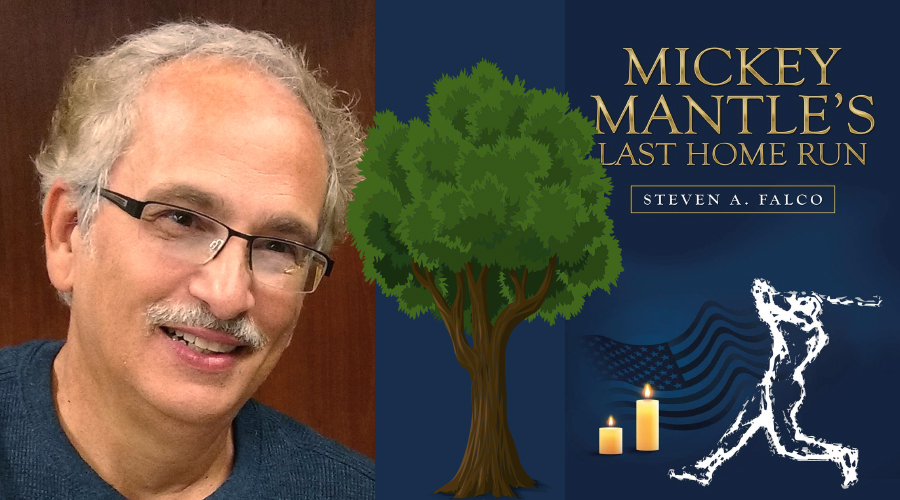 Steven A. Falco’s passion for baseball serves as the canvas for his novel Mickey Mantle’s Last Home Run, a nostalgic story of a friendship that survives the racial and political polarization that is America. The story is set in 1968. The assassinations of Martin Luther King, Jr. and Robert Kennedy, the war in Vietnam, the epically dysfunctional Democratic National Convention and the peaking civil rights movement all brought Americans to the edge of their racial and political sensibilities. That same year, Yankees slugger Mickey Mantle was finally losing his mojo. It all comes together to confront friends TJ, who is white, and Jonathan, who is black. Their differing backgrounds define their differing opinions about the events swirling around them. Their willingness to speak honestly about race and politics, however, removes any pretenses or hidden agendas and serves to make their friendship stronger.

“Despite everything, they have a reconciliation and their friendship endures,” says Falco. “And you can anticipate that these two young people would remain friends for the rest of their lives. And that, you know, we can overcome these differences if we just treat each other like human beings and, you know, work through the problems.”

Like many independent authors, Falco wrote his book while life continued around him. He worked for 37 years for a social services agency serving Union County, New Jersey, and is currently chairman of the Shade Tree Commission in his New Jersey town. He wrote it over a period of decades in fits and starts, not so unusual for authors.

“I just write it all out as it’s coming out of me,” he says. “And a lot of it is, is good stuff. But then a lot of it is a little too much, which I learned over the years, and eventually had a pare down the novel. And I think I was able to get it to a manageable length. I mean, this novel was well over 300 pages when I first did it. So, I was able over the years to pare it down and as I look back on it, had a better perspective on what I was trying to say. “

A message just as true today as it was in 1968, Mickey Mantle’s Last Home Run reminds us that out of the mouths of young people, we can find unvarnished truth and perhaps lessons on how to treat each other. Hear our full conversation in the episode below of The Independent Author podcast: