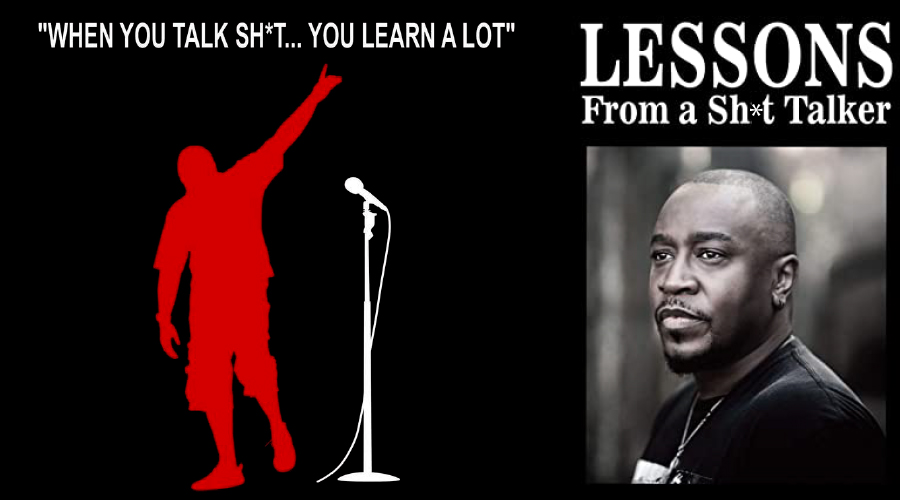 Marklyn Johnson has spent most of his life working hard to not let anyone else define him. In his 46 years on the planet, he’s gone through a journey of self-discovery that’s led him to his current life on stage, social media, TV and now print. While he is a self-described “shit talker,” it’s all about living in the real world and being your own person, and if other people don’t like it, so be it. The lessons he’s learned on the way aren’t actually very radical–self-realization, goal setting, ask for what you want and be prepared if you get it. But his straight-talk and humor deliver the message in a unique way that tends to stay with you. He wrote his book, Lessons from a Shit Talker, in one sitting on a flight from New Jersey to California.

“Tony Robbins and all these other guys,” he observed. “It’s like, they’re making-8-million dollars-a-year successful. What about the everyday guy who’s literally still busting his behind to make a name for himself, to follow his dreams? Why hasn’t anyone written a book from that perspective, because winning isn’t always about the 8-million dollars. Sometimes winning is finding happiness and the things that you’re doing because that’s what you want to do.”

As a black man, Marklyn has hit the same obstacles in life that are common among people of color in America. He attributes a lot of his tenacity and work ethic to his late father.

“As an African-American, nothing is more important than having a father in your life. And a lot of things in our community are based on us not having fathers in our lives. I had a very strong, intelligent father. You know he and I butted heads like you wouldn’t believe, but I realized everything that I’ve accomplished in this life is because of what he put into me.”

In September of 2020, he hosted a comedy night in Scotch Plains, New Jersey featuring regional comedians performing in an outdoor venue, a welcome respite for the community from the COVID pandemic. Marklyn can be found doing his Facebook shows as MisterDirect JusReal and standup comedy as COVID allows.

Below is my conversation with Marklyn on The Independent Author podcast.