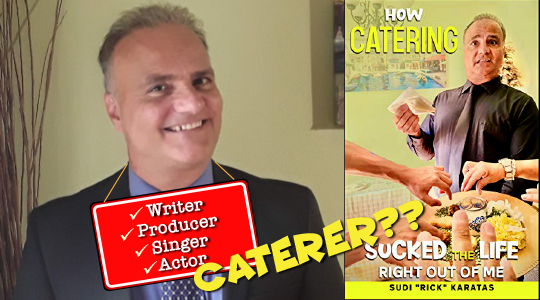 The title alone is smile-worthy: How Catering Sucked the Life Right Out of Me. And the author, Sudi Karatas (pronounced kara-tosh), brings humor to everything he does. And man, he has done a lot.

From humble beginnings in upstate New York and Long Island, Sudi, who also goes by Rick, had dreams of acting and moved to the west coast. Now, 20 years later, his credits fill an entire website–sudirick.com–and make it hard for a podcast interviewer to know where to begin. So, this episode begins with an upbeat song that Karatas co-wrote, and it turns out he’s written a lot of songs, many of which he sings himself. You’ll hear one in this episode. But that’s only the beginning. Rick wrote, produced and acted in the film Walk A Mile In My Pradas, currently available on Amazon, and has two books out based on subjects he knows very well–catering and the LGBTQ community.

We spend the first half of the episode discussing some of his hilarious experiences working in the catering industry, which he still does from time to time.

“I wish I was doing only the writing and producing and all that, but I do some catering on the side,” Rick admits. “And, you know, who knows, maybe getting enough material for volume two.”

The second half we spend talking about his book Rainbow Relatives, a sort of how-to on speaking to children about gay and lesbian family members, why some families have two dads or two moms and the whole spectrum of LGBTQ topics that children are exposed to.

“Some kids have two dads or two moms. Now some kids, turns out, one of their parents is gay. They get divorced. There’s a chapter on transgender, so it’s just different topics. There’s a whole chapter on religion. I call that chapter Pray the Gay Bashers Away. It’s done with a sense of humor.”

Somehow, we crammed all these topics into an episode less than 30 minutes long, so your short attention span is no excuse not to listen!